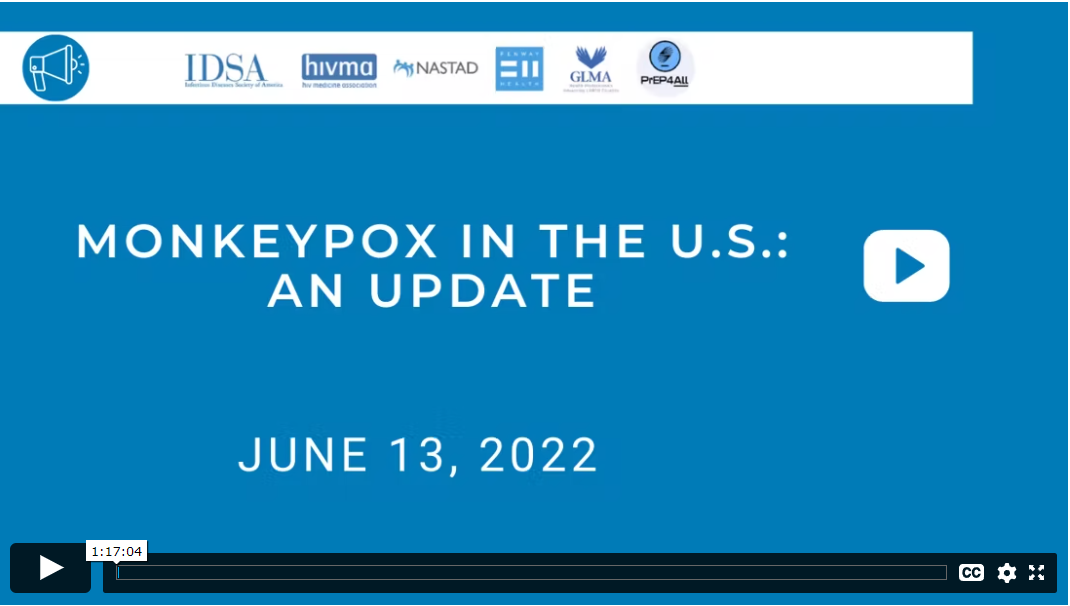 Monkeypox is a zoonotic disease in the orthopoxvirus genus first isolated from macaques in 1958. The virus does not have an identified natural reservoir species, but evidence suggests rodents are the most likely. Animal-to-human transmission results from contact with bodily fluids or mucosal lesions on infected animals.

Human-to-human transmission occurs primarily through direct contact with infected lesions or fluids or contact with contaminated materials like clothing or bedding. It also can be spread by respiratory droplets during prolonged face-to-face contact. Monkeypox has an average incubation period of 6 to 13 days, with a range of 5 to 21 days.

Although a disproportionate number of cases in the recent monkeypox outbreak have appeared among gay and bisexual men, anyone can be affected regardless of sexual orientation. While evidence to date in the current outbreak has not identified a new mechanism of infection unique to sexual transmission, it appears that monkeypox can be transmitted through prolonged physical contact, including intimate sexual contact.

Identify, Isolate, Inform: How Clinicians Can Help Stop the Spread of Monkeypox Virus

IDSA urges clinicians to follow the “Identify, Isolate and Inform” strategy to help stop the spread of the virus.

Clinical symptoms of monkeypox include fever, myalgia, lymphadenopathy and rash. Lymphadenopathy is a feature that may distinguish monkeypox from smallpox. In nearly all patients, the rash usually appears 1to 3 days after initial onset of fever and tends to be concentrated on the face and extremities, including hands and feet. In the most recent outbreak, many patients have been found to have lesions in the perineal and genital regions.

Of note, the skin eruptions are all at the same stage of development at a given time, unlike chickenpox (varicella virus), which has vesicular lesions that erupt at different stages. The monkeypox rash involves vesicles or pustules that are deep-seated, firm or hard, and well-circumscribed; the lesions may umbilicate or become confluent and progress over time to scabs.

People who have had close contact with an infected person are most at risk. Anyone can develop monkeypox. The infectious period begins when the rash and lesions are present on the body.

Case fatality for monkeypox ranges between 1% to 10%; it is higher in infections with the more virulent strain from Central Africa and lower with less virulent strains from West Africa (which are the strains identified in the current U.S. outbreak thus far).

Within 21 days of illness onset:

An alternative diagnosis can fully explain the illness OR

Person Under Investigation: Persons under investigation are individuals who are suspected of having monkeypox based on clinical presentation and/or epidemiologic links reported as suspicious but have not been tested in a Laboratory Response Network laboratory. This includes cases that health departments have been consulted on because of clinician concern.

Personal protective equipment for health care workers caring for a patient with suspected or confirmed monkeypox should include gown, gloves, eye protection (e.g., goggles or face shield) and a NIOSH-approved N95 face mask or higher-level respirator. Patients should be placed in a single-person room with a dedicated bathroom and should wear a well-fitting medical mask if transported outside their room. An airborne infection isolation room may be used if available but special air handling is not required. See CDC: Infection Prevention and Control of Monkeypox in Healthcare Settings.

CDC is urging health care providers in the U.S. to be alert for patients who have rash illnesses consistent with monkeypox, regardless of whether they have travel or specific risk factors for monkeypox. Some patients have presented with only a few localized lesions in the genital area that may be mistaken for syphilis or another sexually transmitted infection.

Clinicians should contact their state health department or CDC (through the CDC Emergency Operations Center: 770-488-7100) as soon as monkeypox is suspected. All specimens should be sent through the state/territorial public health department, unless authorized to send directly to CDC. If monkeypox is confirmed, health departments can order medical countermeasures (antivirals and vaccine) from the Strategic National Stockpile upon receipt of a positive orthopoxvirus test.

What Health Departments Can Do to Help Clinicians and the Public

Health departments can raise awareness of the current outbreak and remind health care providers that a suspected case should be reported to their local health department promptly. They can also help with medical countermeasures and assist clinicians in obtaining antiviral or vaccine therapy.

As noted above, health departments can order medical countermeasures from the Strategic National Stockpile upon receipt of a positive orthopoxvirus test. Vaccines ACAM200 and JYNNEOS (also known as Imvamune or Imvanex) have been shown to be effective for post-exposure prophylaxis.

IDSA/HIVMA Statement:
Stigma Has No Place in Public Health

CDC Resources for Prevention and Response

JAMA Patient Page: What Is Monkeypox?