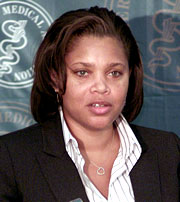 Kim Smith, MD, knew early in her medical training that she wanted to make a difference in the lives of people infected with HIV. She was in medical school when Magic Johnson announced that he was HIV positive, and she remembers being deeply moved by the experience. “I’ll always remember that day. It was a striking thing to see a hero being affected by this disease,” she recalls.

Already drawn to ID because of the “intriguing, detective work” nature of the specialty, Dr. Smith focused her career on HIV medicine. After earning advanced degrees in public health and medicine from the University of Michigan, she trained in internal medicine and infectious diseases at Rush-Presbyterian-St. Luke’s Medical Center and spent a summer working with the AIDS program of the Detroit Department of Public Health. The latter experience, she says, was particularly enlightening. “It made it very clear to me that this is what I wanted to do. I knew I wanted to help people with HIV.”

Since 1998, Dr. Smith has been an assistant professor in the Department of Medicine at Rush Medical College in Chicago, with staff appointments that include assistant attending physician at Rush-Presbyterian-St. Luke’s and voluntary attending physician at Cook County Hospital. In addition to academic and clinical trials endeavors, she has served on a number of advisory bodies, including the HIV Medicine Association (HIVMA) Board of Directors.

Dr. Smith encourages medical students to choose a specialty that motivates and fulfills them, and she describes her own work as her passion. “Patients with HIV come into my office in tears thinking they don’t have a lot of options, that they’re going to die,” she says. “By the time they leave, they’ve learned that nowadays they should be able to live a life that hopefully is as long and productive as they would without HIV. It’s very fulfilling to be able to help people.”