A seemingly harmless ear infection turns into a life-threatening MRSA scare for a 2 ½ year old boy. 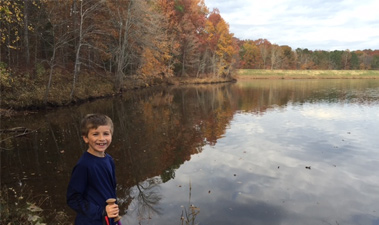 My son Braxe R. was 2-½ when he had what seemed like a recurring ear infection that we believe he contracted at day care. It would be treated, clear and then return. Finally, a doctor took a culture of the stuff leaking from his ear. I still remember the phone call telling us it was methicillin-resistant Staphylococcus aureus, or MRSA. I had suffered from many staph infections, so I was familiar with MRSA and was terrified when I heard the news.

The doctor prescribed several antibiotics in an attempt to treat the infection. Braxe wasn’t in any real pain, and the only symptom was thick oozing fluid in his ear. But my wife and I were fearful, knowing that with every failed attempt to cure the infection the situation became more critical.

Ultimately took Braxe to Duke University Hospital’s infectious disease team and he was seen by Dr. Michael Cohen-Wolkowiez, who saved Braxe and changed our lives. Dr.Cohen-Wolkewiez said Braxe had to be admitted to the hospital, which was frightening. I believe the first course of medicine was vancomycin administered through an IV, not an easy thing for a 2-½-year-old. Braxe was not allowed to leave the hospital room for the week he was there, which was difficult in itself. It was Halloween, and he had to dress up in the room and watch from the doorway while the other sick kids marched by in their outfits, which was heartbreaking. The next day was his older brother’s birthday, and we celebrated in the confines of the hospital room.

I had to sit with Braxe while he was placed on a machine for a CT scan. I will never forget his look of fear and confusion. I also remember feeling helpless and fearful as he was placed under anesthesia for a procedure.

After a week, we were able to take Braxe home, but three times a day for three hours at a time we had to hook him up to the IV to administer the medication. Just hooking him up to the IV was extremely stressful. There was an intense process of sterilization, and we were terrified that we would do something wrong that would make the situation worse. It was challenging having an active 2-½-year old running around while being hooked up to an IV – similar to chasing a puppy on a leash.

After two weeks of that, Braxe was tested to see if the MRSA was gone. It wasn’t, which was crushing.

We tried to be hopeful and positive, but we felt as though we were out of options. Doctors told us they wanted to try a new drug that could help, but noted it could damage Braxe’s internal organs because it wasn’t made for small children. We were not overly optimistic that it would work, but thankfully, it did. The MRSA was finally gone.

We believe Braxe’s inability to hear out of one ear at a time when his speech was forming caused him to develop speech problems. He still has issues with certain sounds. My wife and I both struggled emotionally during this time and the fear made a lasting impression on us.

We’re thankful we have had a happy ending. But the next child may not be so lucky.

Urge your legislators to combat antibiotic resistance by signing the DISARM Act, a bill that will encourage the development of new antibiotics, antibiotic stewardship programs, & antibiotic use and resistance data.