The Ugandan Ministry of Health confirmed on Tuesday, Oct. 11, that the first patient in the capital city of Kampala to have laboratory-confirmed Ebola virus infection died last Friday, Oct. 7. He had fled the Mubende district epicenter, changed his name, sought help from a traditional healer and finally was admitted on Oct. 6 to Kiruddu General Hospital in Kampala.

The U.S. began entry screening for Ebola on Oct. 6 with travelers from Uganda being routed through the same five U.S. airports as in 2014 for Ebola screening from West Africa: New York City, Newark, Dulles Virginia-D.C., Atlanta and Chicago. Uganda has not instituted exit screening from its international airport in Entebbe, a short drive from Kampala.

On a U.S. CDC call for clinicians and communicators on Oct. 12 that provided an update on the Uganda upbreak, it was reported there were 74 cases (54 lab confirmed, 20 probable) and 39 deaths (19 confirmed, 20 probable). The five districts reporting cases are: Bunyangabu, Kagadi, Kassanda, Kyegegwa and Mubende.

One of the CDC slides (see below) showed the epidemic curve. Importantly, the initial probable cases were August 7, 8, 19, 20, 27, 28 … long before the initial lab-confirmed cases in central Uganda near a gold mine and on a major road connecting Uganda with the Democratic Republic of Congo and, in the opposite direction, Kampala. 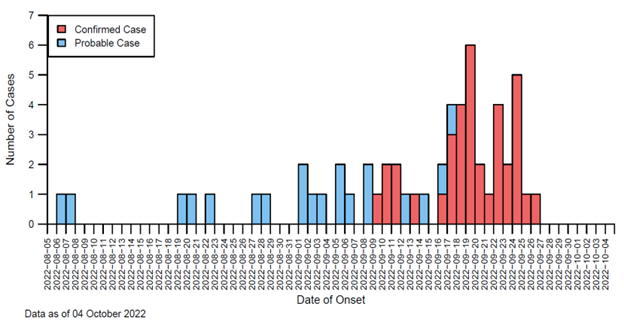 Thus, more cases across more districts and in Kampala should be anticipated even as Uganda, Africa CDC, WHO, MSF and more partners valiantly fight the growing outbreak.