The estimated 30 million cases of paralysis prevented by polio vaccines since 1960 represent a triumph of public health. Global polio eradication efforts committed to in 1988 have achieved several major successes as well (see box). 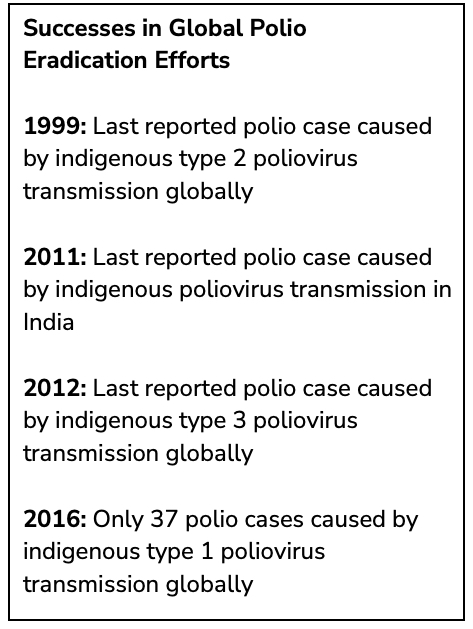 However, the recent declaration of a state of emergency in New York following a reported polio case and the detection of polioviruses in multiple wastewater samples in New York and London have jolted many people with the realization that polio is still around. The news has followed the troubling resurgence of wild poliovirus type 1 cases in Pakistan and imported cases in Malawi and Mozambique. In addition, ongoing transmission of type 2 polioviruses, predominantly in Africa, continues to lead to hundreds of annual reported cases.

Sadly, the epidemiology of polio in 2022 should have come as no surprise. Reported global polio cases dropped from around 35,000 in 1988 to less than 2,100 by 2001. However, since 2001, the annual number of reported polio cases has hovered between 42 (in 2016) and 2,100. Notably, since 2017, reported polio cases increased substantially because of failure to manage the risks associated with the 2016 globally coordinated cessation of Sabin type 2 oral poliovirus vaccine, or OPV, use in routine immunizations.

Ending all polio means successfully stopping all OPV use

Ending the use of all OPV represents a critical step in eradicating all cases of polio, because the use of any OPV comes with very low, but nonzero, risks of paralytic polio. As a live virus, OPV reproduces in vaccine recipients, who can spread the OPV virus to others, which offers the secondary benefit (and risk) of inoculating close contacts. The secondary benefit of increasing immunity in the population using OPV makes the eradication of indigenous wild polioviruses possible. However, in a very, very small fraction of OPV recipients and their close contacts, replication of OPV upon first infection can tragically lead to paralysis.

More importantly, the use of OPV comes with an even greater risk in areas with low immunization coverage due to the ability of OPV to transmit widely in the population. Specifically, while OPV use induces immunity to those infected secondarily through contacts with OPV vaccinees (and their contacts, etc.), the extent of transmission of these OPV-related viruses can allow them to evolve into OPV-related, vaccine-derived polioviruses that can behave the same as wild polioviruses.

In contrast, the inactivated poliovirus vaccine currently in use in the U.S. and elsewhere carries no risk of replication and reversion, but this vaccine only protects the recipient from systemic disease. Also, it has proven ineffective in stopping transmission, even in settings with very high immunization coverage (for example, Israel, and now the U.K. and U.S.).

Adding complexity to the mix, individuals protected from paralysis (due to either prior infection with a poliovirus or prior effective vaccination with a vaccine) can still become (re)infected and excrete polioviruses until their immune system clears the infection. This means that even those with immunity can participate in transmission, and they do so without detection, because we only detect and count the cases of those unlucky individuals who develop paralysis.

Thus, for every case of polio observed, thousands of individuals may have participated in the transmission, and the only way to eradicate poliomyelitis is to stop all live polio vaccine use. This requirement would also apply to the novel genetically modified OPV for type 2 currently in use under emergency use listing for outbreak response. Although the novel OPV promises to reduce some risks, it does not eliminate them.

The challenge for polio eradication may sound simple: Raise immunity for all three types of polioviruses high enough everywhere in the world at the same time to make the circulating viruses, and any residual excretion that occurs from those recently vaccinated with OPV, die out. We know that we can achieve this because of the successes listed above, but this requires global cooperation and commitment driven by effective leadership and outstanding management.

Now, 34 years after the 1988 resolution to eradicate polio by the year 2000, our inability to “finish the job” represents a significant global health management failure with respect to the interdependent risks posed by polioviruses. The reality of poliovirus transmission in the U.S. is already leading to the need to spend national resources to protect vulnerable citizens, which may impact perspectives related to the use of national funds to support activities in other countries. Delays in achieving global polio eradication and nationalistic arguments have already led to a significant reduction in financial contributions by the U.K. to global polio eradication efforts and reignited questions about its feasibility and value.

Although polio eradication continues to be a theoretically achievable goal, polio epidemiology in 2022 will likely put an end to any optimism about the feasibility of ending all global cases of poliomyelitis in the foreseeable future. Delays also continue to diminish the expected return on investment.

This is the time to decide: Are we still committed to our 1988 promise to eradicate poliomyelitis globally? If so, can we agree on an effective strategy and on ensuring accountable performance and commitment of the resources required to cost-effectively implement the tactical steps required to get there?