On Sept. 29, Reuters, citing a televised speech by Ugandan President Yoweri Museveni this week, reported that six health care workers, including one medical student, have been infected with the Sudan ebolavirus:

“In a televised address President Yoweri Museveni said that in addition to five confirmed Ebola fatalities, another 19 deaths in the community were likely due to the disease as they displayed similar symptoms but samples were not taken from them to confirm this before their deaths.

Another 19 cases of the disease have also been confirmed, he said. He said that among the other confirmed infections were six health workers, including four doctors, one anaesthesiologist and one medical student.”

In a 2-minute YouTube video, President Museveni is shown during part of his televised speech on the Sudan ebolavirus outbreak explaining there is no need for curtailing travel or public gatherings due to this outbreak. Uganda does have extensive experience with past outbreaks of Ebola, including the three strains of Sudan, Zaire and Bundibugyo.

Another part of this video shows Ebola screening at the Kenya-Uganda border.

As of Sept. 29, no one has tested positive for Ebola outside of Uganda or in the capital city of Kampala or in nearby Entebbe, where the large international airport is located.

This outbreak of Sudan ebolavirus should accelerate efforts to develop a post-exposure and pre-exposure vaccine for this strain (species) of the virus, as well as specific monoclonal antibodies, by analogy to such preventive and therapeutic countermeasures that already exist (only) for the Zaire ebolavirus.

On Sept. 29, WHO’s Regional Office for Africa also tweeted an update graphic from Uganda that they now have 50 cases, 24 deaths and 414 contacts being monitored to care for and trace if they become ill with Ebola: 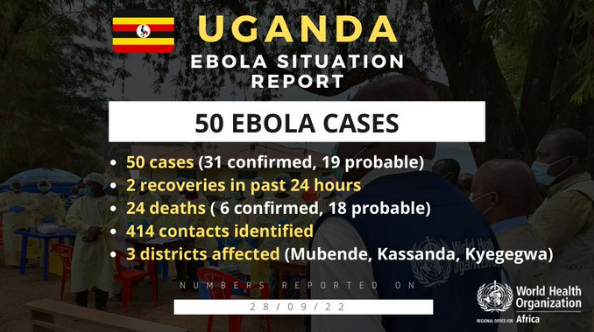